George Stroud wants you to know something: “You are at your best when things are at their worst.”

He knows about things being at their worst. A 2011 job loss led to two years of homelessness and shelter living, but George never stopped focusing on being his best. In 2013 that focus led him to a home at Heron’s Landing, a supportive housing community operated by Virginia Supportive Housing (VSH).

For some, simply coming home to Heron’s Landing would have been achieving their best. But George dreamed his best could be even better.

“I wanted to get back out on my own so someone else could have the kind of chance Virginia Supportive Housing gave me,” says George.

In 2018 VSH received funding from the Hampton Roads Community Foundation to start a program for residents like George. Appropriately named Move On, the program is a resident-initiated process of evaluation, preparation, and transition to independent, self-determined lives.

Duane Miller, Move On team leader, says interested residents must meet goals around physical, social, and financial wellbeing. “We keep it very real,” says Duane of the process. “If they are struggling with finances in our supportive environment, how much more will they struggle when they are on their own?”

Social support systems also matter a great deal. “Do you have friends or family who will check on you if you’re sick? These are just as important as the finances,” says Duane.

Once a resident has demonstrated readiness, VSH works with local housing authorities to find affordable housing vouchers. “They can be anywhere the resident wants to go,” says Duane. “One woman’s family was in Alabama, so we connected with housing resources there to help her find her next home.”

VSH ensures a successful post-move transition through a year of wrap-around services. After that, “We have a graduation ceremony and they are flying on their own once again,” says Duane. “But we are always available, no matter what. They might leave our properties, but they never leave our hearts.”

For George, home is now a one-bedroom apartment in a senior-housing complex. He is on his own but not alone. “They call to check on me,” says George. “They call just to say hello. They are still there for me. Anything I need.”

And even though for George things have come a long way from being at their worst, he knows there is someone else struggling right now like he once did. “By getting out, I give someone who is where I was a chance to do what I’ve done,” says George. “I want to tell my story to the current residents. I want to tell them, ‘I did it, and you can, too. Just keep being your best.’”

In 1991, a handful of US chefs began embracing a culinary innovation called sous vide, and Kenny was in the kitchen with them. He had helped open a restaurant in Washington, DC and learned the method of cooking vacuum sealed food in hot water from one of its pioneers. “I’m pretty sure I’m one of the first people on the East Coast to use the sous vide system,” Kenny said.

Kenny’s skills led to a successful career in the restaurant business, working in some of the most popular restaurants in DC, Richmond, and Charlottesville, and training aspiring chefs. The pace was fast, so when he began to notice some dizziness, he brushed it off. Eventually, though, he learned he had experienced a series of mini-strokes.

“Then, on the morning of April 21, 2017, I woke up, and my arm was numb.” It was a stroke. He was hospitalized for a month and released. “I had no income and had to leave the apartment I was sharing.” In a matter of weeks, Kenny went from having a home and a career to living in a homeless shelter. “The money I had saved up over the years, I went through quickly, using it for food. Trying to stay alive.”

“Homelessness is a humbling experience. I didn’t know anything about shelters or soup kitchens or food banks. But I did know how to survive. I had been in the army. I had discipline.” He secured disability benefits and began saving to get back on his feet. That day came when he learned about an opening at The Crossings. “I had to get there early because there were others on the waiting list. I was waiting out front when the office opened.”

Kenny describes how The Crossings provides him with a full apartment with a full kitchen he uses every day — and more. “The staff brings in food from the food bank each week. If you’ve got an appointment with Social Security or anything to do with your health or finances, they help you get to the appointment.”

His unique blend of first-hand experiences and a passion for cooking are nourishing a project he’s working on to introduce after-school cooking classes to underserved youth. “Teach them the basics so that they can cook their own food.” He reels off a list of why this practical skill has big benefits. The kids will become more self-sufficient. They’ll eat healthier. And considering that Kenny began working in a kitchen when he was 14, those classes might be the beginning of another young chef’s career.

Before Patina was injured in 2009, she says, “I was good.” As a bus driver in Jersey City, she was paid well and had an apartment of her own. But the injury and a subsequent knee replacement surgery inhibited her ability to work. So in 2011, she moved in with her father and took care of him until he died in 2014. Yet after his death, mortgage problems caused her to lose the house.

At that point, Patina moved to North Carolina to live with cousins. But without health insurance, she was unable to access medication and manage her chronic health conditions, including ongoing pain in her knee and high blood pressure. These problems led her to move again, this time to Richmond to stay with another cousin.

Patina arrived in Richmond at the end of January 2018. But immediately she felt that she couldn’t live with her cousin full-time. “I didn’t want to burden her,” she explained. So her cousin began to help her in other ways, from gaining access to health insurance through VCU to connecting with social services to obtain food stamps and a Housing Choice voucher. Patina also got on the list for an apartment through Virginia Supportive Housing (VSH), which the Housing Choice voucher helped her afford. She moved into her apartment at New Clay House on March 29th, 2019, after five years without a place of her own to call home.

Patina says that she has learned a lot during her months at New Clay House, both about herself and about the variety of experiences that fellow residents have had. She appreciates the privacy of her apartment and now regularly uses medical support services and attends church services at New Clay House. “I like interacting with the people that come because they come in good spirit.”

Reflecting, Patina says she is grateful for the support of her family and her faith on her journey. “It has taken me a lot of steps to get to where I am now.” Now, she says, “I try to stay happy no matter what my situation is.” 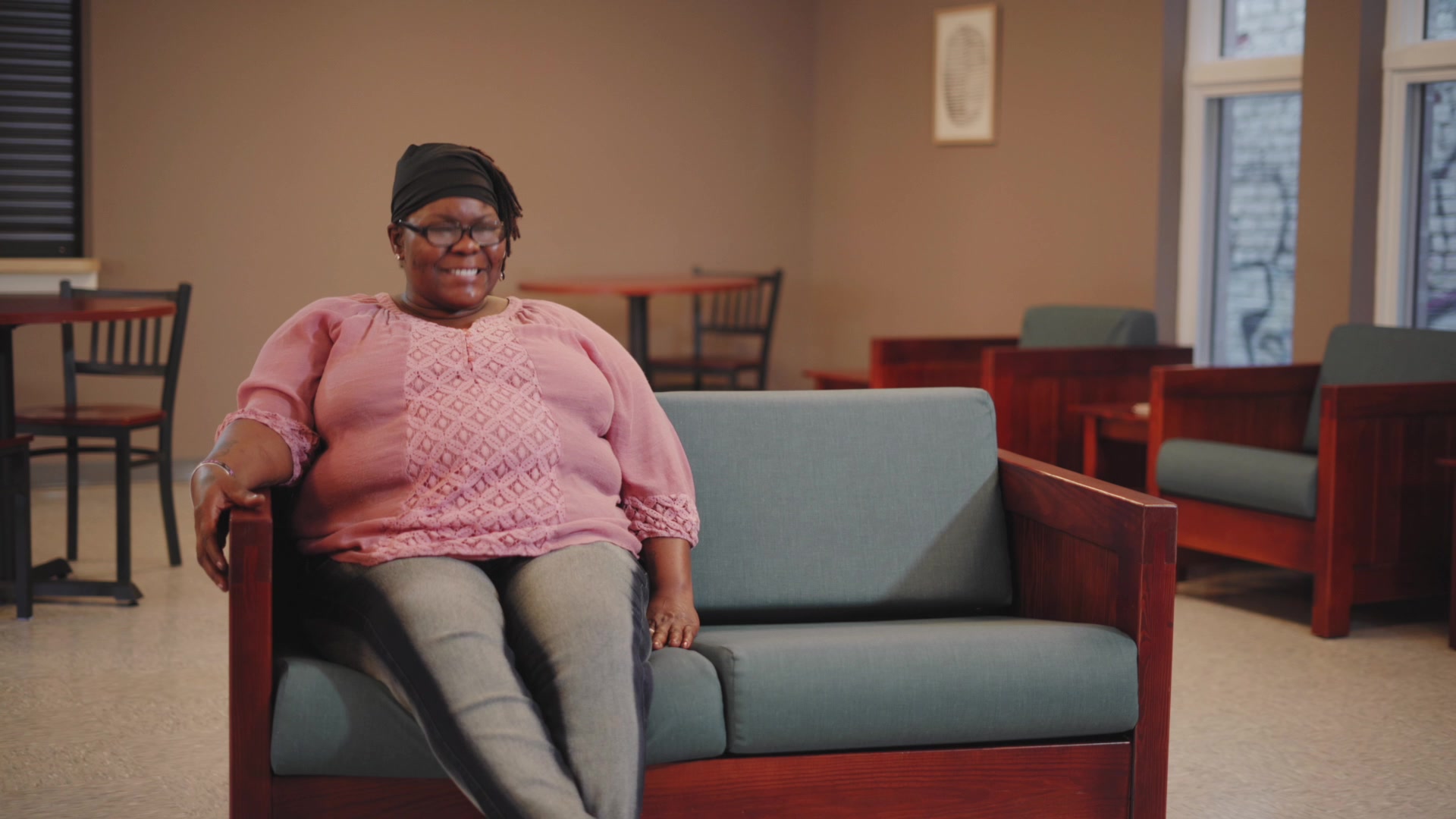 Lavern’s story is one that epitomizes the power of home. A resident of New Clay House since December 2018, Lavern has spoken to us on several occasions to share her journey. Her’s is one of courage and hard work – showing just how impactful access to safe and secure housing can be in regaining one’s dignity and independence. 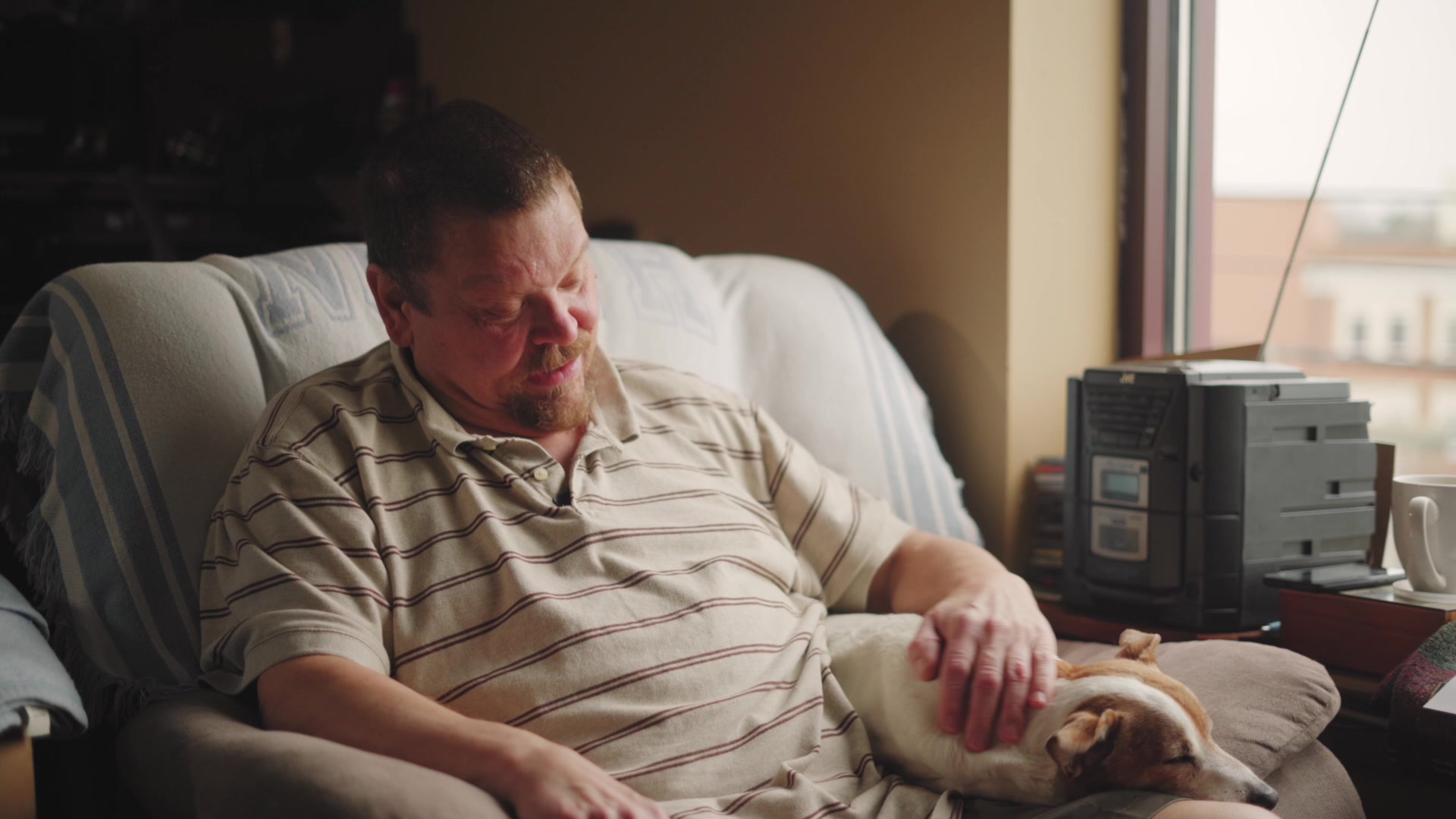 Effects of childhood head injury derailed Cookie’s life decades after it took place, leading him to experience homelessness. Cookie’s story demonstrates the power of home as a social safety net, in both regaining stability and in reclaiming one’s life. 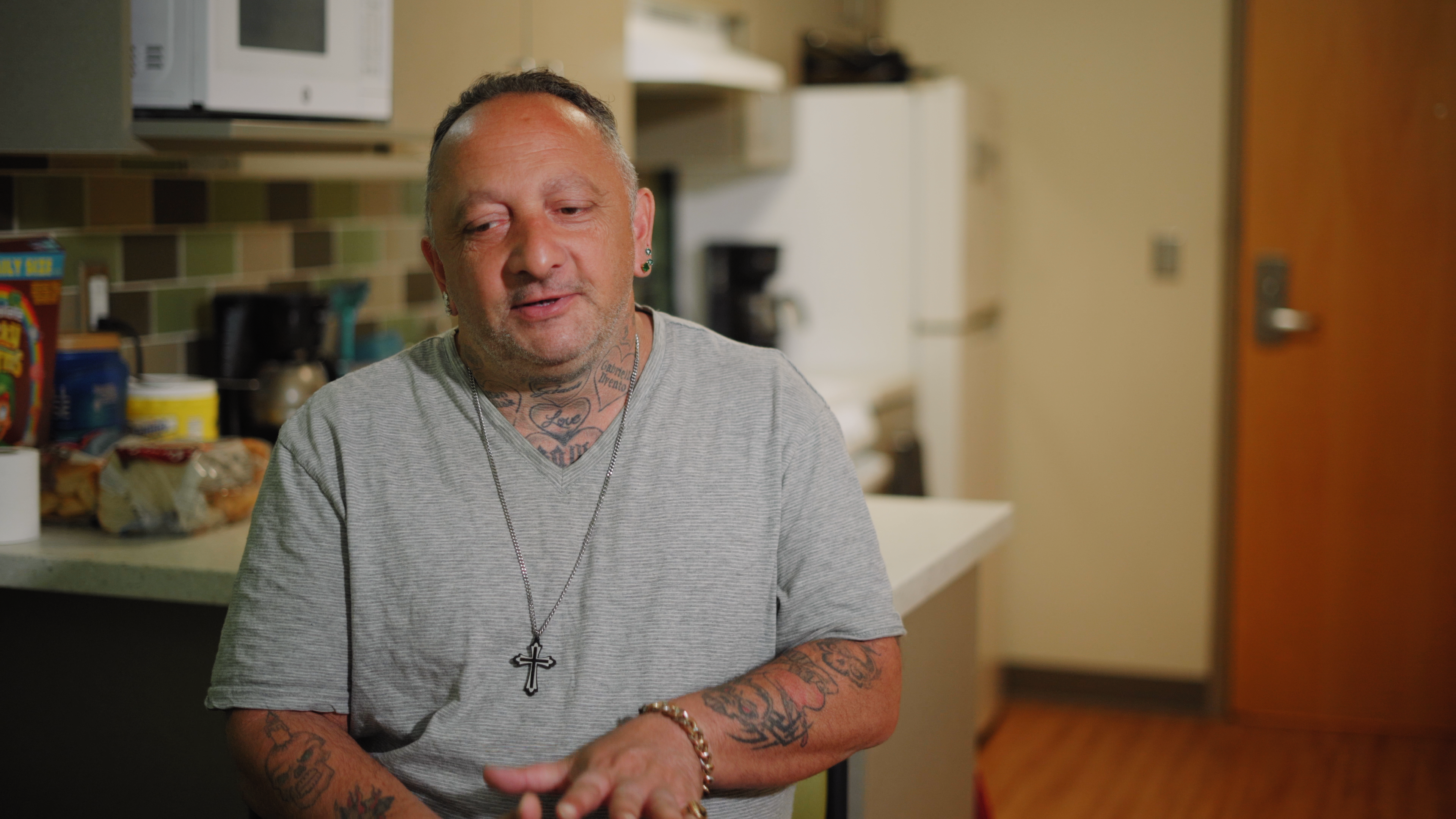 In hearing Skully’s story, it’s clear that homeless services are not one size fits all – and the importance of a person-centered approach. In his video interview, hear from Skully and his Supportive Services Specialist as they reflect on his journey thus far.