A local basketball star, Ronnie Valentine of Norfolk, Virginia, was found living in a program very similar to Virginia Supportive Housing in Miami, FL.  His story is amazing, and the hope he found is worth reading! 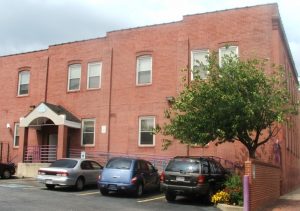 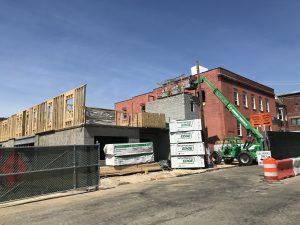 Virginia Supportive Housing has been making homelessness history for 30 years now.  Doors opened at the first VSH multi-unit property back in 1992.  That was New Clay House, situated at the corner of W Clay Street and N. Harrison Street.  Originally, there were 47 single-resident units with shared shower and kitchen facilities.  Although the model wasn’t perfect, New Clay House contributed to the incredible success rate Virginia Supportive Housing achieved; in the Richmond area, 98% of the formerly homeless individuals housed by VSH did not return to homelessness.

But experience demonstrated improvements could be made.  New Clay House was good, but it was not ideal.  Other properties in Hampton Roads, Richmond, and Charlottesville showed fully-furnished individual studio apartments could solve the problem of homelessness better.  Think of it as the difference between a lonely college dorm room and a home of one’s own.

Not only will the 47 pre-existing units double in size, there will be an additional 33 studio apartments for a total of 80 formerly homeless individuals off the streets.  Every apartment will have a kitchenette with full-sized appliances and also a full bathroom.  Residents will have a community room, a private courtyard, a computer room, a phone room, a fitness room, laundry facilities, and structured parking.  VSH property management and services staff can expect their own office space also, and a large donation bay is in the works as well.

Construction started in January of 2018 and is progressing rapidly.   The expected completion date is in early 2019.

Virginia Supportive Housing is on a mission to end homelessness, but we can’t do it without you. Come have a beer on our Junior Board and learn about the great work VSH does in Virginia, as well as how you can make an impact locally and statewide.

On Monday May 2nd, The National Low Income Housing Coalition released Out of Reach 2011, an annual report that contains a “side-by-side comparison of wages and rents in every county, metropolitan area, combined nonmetropolitan area, and state in the United States.” The report showcases the disparity that exists between money needed to pay for rent and money that is realistically earned by minimum wage laborers. The report’s title very accurately describes this gap between wages and housing expenses since, clearly, housing is quite simply out of reach for this sector of our population.

One feature of the report is a calculation of the Housing Wage, or the capital a person would need to earn working full-time in order to afford the Fair Market Rent on a modest two-bedroom unit. Furthermore, the report examines the amount a person would need to work for minimum wages to afford the most standard of rental units. The Out of Reach report also provides income and wage data for a variety of areas in the United States to offer rationale for the argument that housing must be made more affordable.

I found this report to be particularly eye opening, since it offers an irrefutable argument as to why many individuals find themselves on the streets. Economically speaking, an individual needs to work an extraordinarily large amount of hours earning minimum wage (or similar wages) to afford a standard two-bedroom unit. All of these calculations determine the situation strictly on hours and wages without consideration of other facets of life like children, unforeseen emergencies, other expenditures, illness, accidents and other problems that life throws at us.

The Out Of Reach report is fascinating in that it makes comparisons easy to notice. For example, The Fair Market Rent for a two-bedroom unit in Virginia is $1,022. A household must bring in $3,406 monthly or $40,876 yearly to be able to pay for this amount of rent and utilities. At exactly 40 hours a week every week of the year, this translates to just under $20.00 per hour just to afford housing, all other surprises in life aside.

The equation is even more surreal for a minimum wage worker in Virginia. At $7.25 an hour, an hourly worker must work 108 hours per week, for the entire year, in order to maintain an average two-bedroom household! The fact that an 80 hour work week is considered grueling by most people makes 108 hours a week just to keep a roof over your head absurd! In this scenario, one can forget the idea of savings or leisurely spending. With the numbers in plain sight, it is a wonder why there aren’t more organizations like Virginia Supportive Housing that strive to help low-income people bridge this financial gap. Virginia Supportive Housing works to alleviate the grip that this earning gap has on many individuals all across the country.

Did you know…that homelessness is the 800 pound gorilla in the (news)room?

Although homelessness is not a frequent topic in the news, its shadow haunts many of our headlines.

On any given day, it is unusual to see even one brief mention of homelessness in the local news. In today’s Richmond Times-Dispatch, for example, the most popular articles focused on Ted Stevens, pop tarts, sex abuse, and high-speed chases. A targeted search using “homeless” as the key phrase comes up empty.

On NBC 12, the top headlines feature Amtrak discounts, the opening of Richmond’s first charter school, and the investigation results of a deadly police standoff. Again, a key phrase search comes up empty.

Items about homelessness are slightly more frequent in the South Hampton Roads area. Yesterday, on Wavy.com (the news channel serving that area), there was one item about the approved installation of “donation meters” along the Virginia Beach board walk, a measure designed to address the issue of panhandling.

A Google search of top national news items results in the tirade of the JetBlue flight attendant, Ted Stevens, flooding in China & Pakistan, and the trade deficit. If you narrow the search, only two items come up for today’s date; one about homeless camps “sprouting like mushrooms” in Santa Cruz, and the other about the death of a proposal to build a large housing complex for the homeless in the Dallas area. This summarizes the number of items appearing across the national radar.

Even more comprehensive national news outlets such as NPR only infrequently mention the issue of homelessness, and it is often buried under other “more timely” issues. For example, on the day that the federal homeless plan was released (June 22), it was necessary to wade through fourteen other articles covering topics such as cleaning oiled birds, the guilty plea of the New York car bomb suspect, and the Rolling Stone article about General McChrystal before locating the announcement by the U.S. Interagency Council on Homelessness.

It’s no wonder that people experiencing homelessness are frequently referred to as “invisible.” Their daily struggles are not newsworthy, and very often, when they do appear in the news, the reports have an unpleasant connotation that seems to support the overall perception that “the homeless” are dangerous drug-addicted mentally ill criminals who are too lazy to work and feed off services supported by tax payer dollars.

Although homelessness is not the explicit focus in any of these headlines, its shadow lurks on the edges of all these issues in a conspicuous but unspoken way, because these factors, especially when combined all at one time, play a critical role in the housing crises of both individuals and families.

And ultimately, we care about unemployment, health care, and affordable housing because of the specter of widespread homelessness that hangs over all these issues, threatening the very foundations of our society.

So the next time you pick up the paper and read the latest news regarding foreclosures, unemployment rates, or health care legislation, remember that, whether we acknowledge it or not, housing as a fundamental human right is at the core of every headline.

Read More
Tweets by @vshousing
Subscribe to Our E-Newsletter